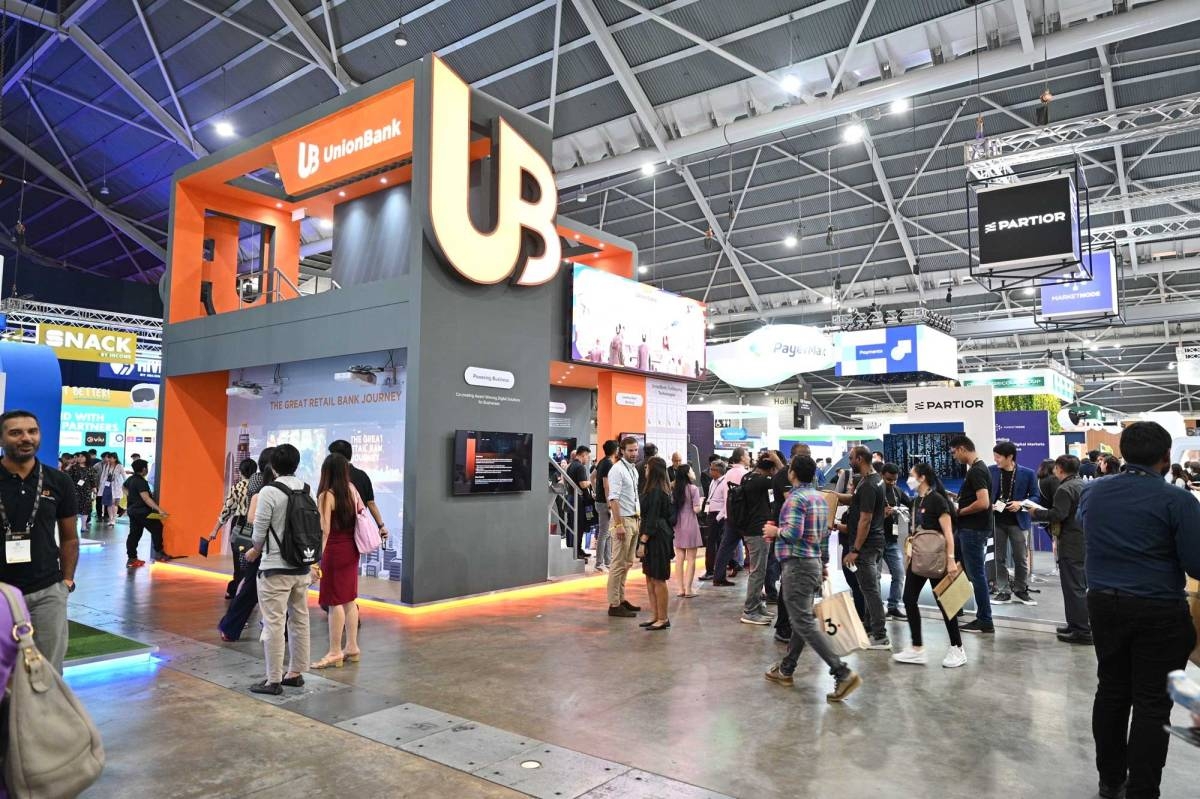 UNIONBANK stood out on the global stage at the recently concluded Singapore FinTech Festival (SFF) for the fifth year in a row as the only Filipino bank to be a Gold Sponsor with the “Tech Up Pilipinas” initiative, the cornerstone of its digital strategy.

UnionBank has been participating in the annual festival since 2018, working in the hall with the largest banks in the region. This year, the event was attended by over 60,000 attendees, over 850 speakers and over 500 exhibitors, demonstrating its status as “the most influential fintech event in the world.”

A UnionBank delegation led by Chairman Erramon Aboitis and President and CEO Edwin Batista showcased the key business units that form the backbone of its digital journey through a two-story booth in the show’s priority sponsors area.

Pioneering technologies developed by UnionBank for blockchain, data analytics and artificial intelligence were featured on the booth’s patent wall, and the Bank’s digital journey was prominently featured in the booth’s centerpiece. Notable was the game-changing video showing UnionBank’s acquisition of Citi’s “crown jewel”.

Several screens at the booth showed how UnionBank’s technological innovations had touched their customers, while senior representatives from UnionBanks stood ready to tell the deeper stories behind them.

In addition to interacting with customers, entrepreneurs, investors, government, financial and technology leaders, top managers of the UnionBank Group held discussion panels and spoke at various stages of the 2022 SFF. Corporate clients were also invited to listen to the festival for presentations of global and local significance affecting the financial industry.

The UnionBank booth is adorned by BSP Deputy Governor Chuchi Fonassier and Director Mkhel Plabasan (2nd and 3rd from right) who are greeted by UnionBank President and CEO Edwin Bautista (3rd from left) along with (from left to right) Board Director Roberto Manabat , President and CEO of UnionDigital Arvi. De Vera and UnionBank CTO Henry Aguda

Union Bank of the Philippines (UnionBank) has always been one of the first to implement customer-centric technological innovations, resulting in it being consistently recognized as one of the digital pioneers in Asia, ranking among the nation’s best all-round banks in terms of profitability. and efficiency. . It has received a record number of awards and recognitions such as “Most Recommended Retail Bank in Asia Pacific” by BankQuality.com; 5x “Digital Bank of the Year” by The Asset Triple A; Asia Pacific Digital Trailblazer by IDC Asia Pacific and Top 1 Most Valuable Banks in the Philippines during COVID-19 by BankQuality.com.

Almost to be expected as an annual event, UnionBank’s participation in the Singapore FinTech Festival is a testament to its promise to secure the future of banking with “Teching Up Pilipinas” to best serve the growing needs of Filipinos around the world while fulfilling its vision of building a bank of enduring greatness. and innovating to improve the world.