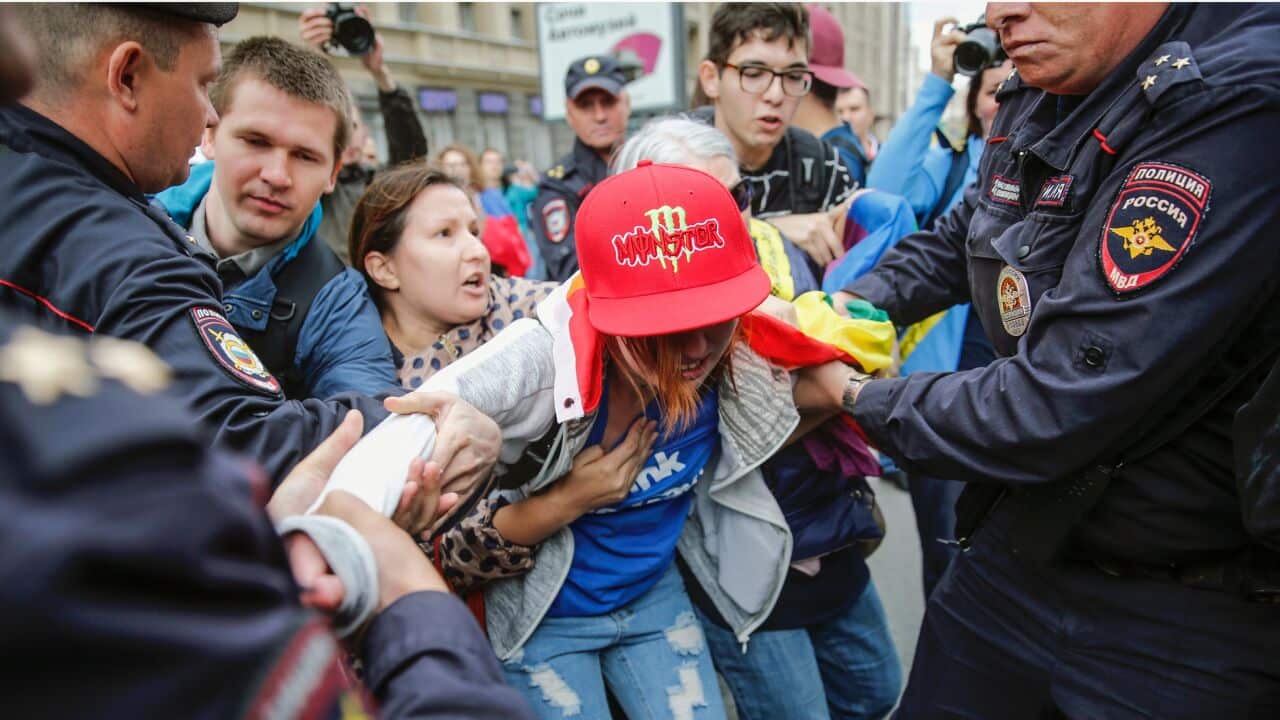 On Thursday, Russia’s parliament approved a bill expanding the ban on “LGBTQ propaganda” and restricting the “demonstration” of LGBTQ+ behavior, making any expression of the LGBTQ+ lifestyle virtually impossible.
Under the new law, which still needs approval from the upper house of parliament and President Vladimir Putin, any act or information that is considered an attempt to promote homosexuality, whether in public, on the Internet, or in films, books or advertisements, could result in major fine

Legislators say they are defending the traditional values ​​of the “Russian world” from the liberal West, which they say is determined to destroy them. This argument is also increasingly being used by officials as one of the justifications for Russia’s military campaign in Ukraine.
The authorities have already used the current law to stop gay pride parades and detain gay rights activists.

Dimitri, known by his stage name Camilla Crazy White, performs during a drag queen show at a pub in Moscow on November 13, 2022. Source: AFP / (Photo by ALEXANDER NEMENOV/AFP via Getty Images)

“LGBT today is an element of a hybrid war, and in this hybrid war we must protect our values, our society and our children,” Alexander Khinshtein, one of the authors of the bill, said last month.
Legal experts said the bill’s vague language allows law enforcement to interpret it as broadly as they wish, leaving members of the LGBTQ+ community in a state of even greater uncertainty.

Ksenia Mikhailova of the LGBTQ+ support group Coming Out said gay bars or adult-only clubs would likely be allowed to operate, although perhaps not for advertising, but that same-sex kissing in public could be perceived as a violation. .

And she said that same-sex couples would start to fear that their children could be taken away from them on the grounds that they were exposed to the LGBTQ+ lifestyle.
The law provides for fines of up to 400,000 rubles ($9,718) for individuals and up to 5 million rubles ($121,475) for legal entities. Foreigners face 15 days of arrest and subsequent expulsion.

Ms Mikhailova said the original ban nine years ago on LGBTQ+ “propaganda” against minors triggered a wave of attacks on the LGBTQ+ community and that a “tsunami” could now be expected because the current amendment “says the state is not against violence.” regarding LGBT people.

Political scientist Ekaterina Schulmann said the law aims to ban anything that is indicative of an LGBTQ+ relationship or inclination as “socially acceptable” or “equal to so-called traditional family relationships or sexual relationships.”

“People – authors, publishers, just people – will think twice before even mentioning anything LGBT-related,” she said in an interview from Cologne, Germany.

Ms Schulmann said the bill was also a “huge win” for communications regulator Roskomnadzor, which has already “taken over the powers of the political police” and now has the power and responsibility to track all kinds of information in search of LGBTQ+ propaganda.